As anyone who has been in South Africa over December knows, the heat has been extreme. In the Cape, until very recently, there has been no Cape Doctor (the south-easter) to alleviate the heavy, enervating conditions, while up north, in and around Gauteng, it’s been plain scorching. For many, even regular wine drinkers, beer will have been the beverage of choice of refreshment.

With the change in climate, or at least continuation of El Nino for maybe a year or two, wine producers will need to learn how meet this growing challenge (that’s both more extreme heat and beer being chosen over wine).

It would be easy to retort ‘what’s wrong with our youthful, refreshing white wines’, but that’s pretty limiting; there are plenty who prefer red anyway. The trend to lighter reds – lower in alcohol, extraction and/or oaking – is a welcome one, but they won’t always hit the mark.

Let’s skip what is generally known as rosé; simple, fruity pinks, which have their place and fans. I think I discern a category emerging between lighter reds and rosé. Of the few who are making these wines – some call them lighter reds, others rosé – all have features in common: all are dry and each has a dimension which lifts the wine into a category of its own.

Sijnn Saignee is one of my favourites. Producer, David Trafford, says it’s deliberately harvested and made as a light red, hence the name ‘saignee’ or ‘bled’ rather than rosé. 2013 is a savoury blend of mourvèdre, shiraz and tinta amarella. Mainly de-stemmed, the gently crushed grapes are left on the skins for a day or two before the juice undergoes a spontaneous ferment in barrel, where the wine remains for around nine months. It is lightly fined but bottled unfiltered. The oak is important in giving the wine more volume without disturbing its vibrancy. Its R165 price tag is substantial, but red-wine lovers won’t feel short-changed in value or taste.

Fable Mountain Vineyards Belle Flower 2014 (R140), the maiden vintage, is much more rosé in appearance, but don’t be deceived, it has dimension way beyond its appearance. A blend of Swartland grenache, syrah and mourvèdre, it was fermented and aged on its lees for a year in a concrete egg. I’ve noted with other wines vinified in these eggs that they have a heightened sense of texture, in this case pleasantly grainy, an feature that is complementary to its low 12% alcohol and youthful verve.

The most recent wine in this genre I’ve tried is Fledge & Co’s Touriga Nacional Vin Gris 2015. Fledge & Co, aka partners Leon Coetzee and Margaux Nel (also winemaker at her family’s farm, Boplaas), are making a name for themselves with their characterful wines.

This vin gris is part of their experimental range, ‘Made each year, so far, as a means to try out new techniques, grapes and to push the boundaries a little bit more.’ Coetzee explains, adding: ‘The packaging is ultra minimal, using recycled glass & craft paper – as that’s what the aim is of the wines, ‘minimalist enjoyment’.’

The label (pictured and attached round the neck with a rubber band) tells the whole story – nothing more to be added, except the great value R70 price and the less great news that it’s very limited and available from Vino Pronto in Cape Town (www.vinopronto.co.za) or chance your luck with Fledge & Co themselves. 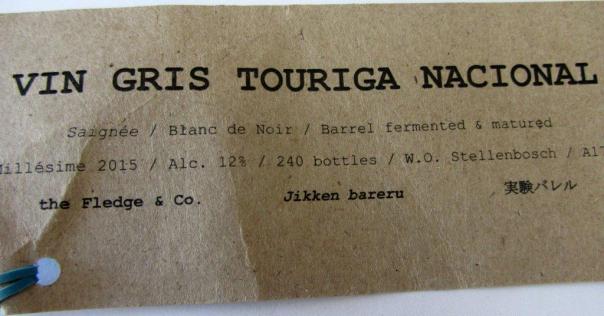 Yellowtail and tuna, both having ‘meaty’, firm flesh, made really good partners with these wines, but I have no doubt that the Sijnn and Fledge & Co would not be over-shadowed by veal or lamb, even mildly spiced wors. Belle Flower would probably be happier with poultry or pork.

This is a category that can beneficially grow this year, especially if it’s as hot and dry as 2015.