What a remarkable year 2020 is turning out to be and it’s not quite yet half way through. To most of this planet’s population, Covid-19, economies and how we humans treat each other are matters of great concern.

On a more personal and happier note, I celebrate two landmarks this year; the first, my arrival in South Africa 50 years ago; the second, embarking on my 35th year as a contributor to the Platter Wine Guide. Imagine, I’m the longest serving person involved with the guide in any capacity! So much has changed since I first worked with John and Erica on the 1987 edition; it’s always been a labour, an endeavour but never boring and always a source of pride on publication.

How did I come to be involved? I’d met the Platters shortly after the first edition and subsequently got to know them better when I ran the Cape Wine Centre, part of Drop Inn. When I decided to leave at the end of 1985, it was with the wild idea of freelancing. I’d made numerous contacts in the industry during the two years I was at the Cape Wine Centre but had no idea what that would lead to, if anything. 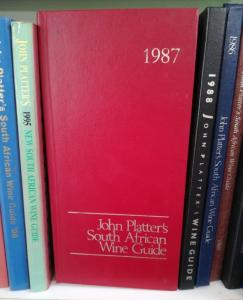 Hardly had 1986 got underway, than I received a call from John and Erica, asking whether I’d like to join them working on the guide, as it was becoming too big a task. What an opportunity, what a task!

First, I needed to buy a desktop computer, as I’d been working on my Dad’s old manual typewriter. Then the guide needed to be loaded onto the computer, as to date it had been updated by cut and paste. I think I did much of the uploading but what I remember more clearly is assigning each producer a letter, the first of their name, plus the numerical position within that letter. All fine and good until there were new entries which threw out any semblance of numerical order on those floppies.

I was responsible for tasting, writing up and chasing up the majority of the Co-ops as well some Estates. Remember in 1986 it was still the dark ages; no internet, no emails, cell phones, WhatsApp, just old-style Telkom landlines. Producers in those days, Co-ops particularly, were much less switched on (sales of their bulk wine to the wholesalers was much more important than the tiny amount they bottled, mainly for their Directors); I spent a lot of time on the telephone. The wines were delivered to Delaire, the Platters’ home with Erica bringing through piles of boxes every week; these were as overwhelming then as they are today.

Technically, things were easier the following year with proper coding for the star ratings that Creda Press could read and, which to my relief, meant very few changes to the disks were necessary. By now the Platters had moved to Clos de Ciel.

Does anyone remember XYWrite? By 1988 this is the software John wanted to use, so the guide could be set on floppies and updated from there. I can’t remember whether that happened, but I do know I was responsible for all the Co-ops (there were around 70 in those days), collecting the data, tasting, writing up, including short introductions. The ticks, squiggles and FWT (Forms, Wine, Tasted) (see photo) were my shorthand method of keeping track of progress.

It seems remarkable now but around 1992/1993, tastings were held with the winemaker on the farm, something John had always done but was new for me and my now co-taster, Helen Frith. As time-consuming as these tastings were, we managed within the tight tasting schedule. I do remember being rather sorry when these visits stopped, partly a result of there being just too many producers. Today, it would be impossible.

Automation is taken for granted today but even 20 years ago the maps required manual input,  a task I helped with being familiar with so many of the wineries. There’s nothing more frustrating than a destination misplaced on a map and that did happen.

Awarding five stars was, of course, John’s prerogative; once I’d graduated beyond the Co-ops, as good as some of their wines were, there was more likelihood of finding one of these earth-shattering wines. Even the few that struck me as worthies were, I recall, deemed by the boss to be ‘not quite there yet’!

The shifting of gears began in 1997, when the Platters sold the guide, which became a wholly owned subsidiary of Creda Press, the guide’s regular printer. Erica still wielded her editor’s stick, John his fearless taste buds, but by now he had a handful of tasters apart from myself.

The times they certainly were a-changing. More of that once year 35 is over.

4 thoughts on “Platter – my early years”